Fraser Hollins
news
about
multimedia
calendar
links
contact
biography press discography
Fraser Hollins has been praised as "one of Canada's great bassists." Don Thompson - Canadian Jazz Multi-Instrumentalist. A priority in his artistic growth has been to develop versatility in many styles and idioms because of his sincere love for many musical cultures and genres. This has proven an invaluable quality for him as he has led an enriching musical life for the past 15 years in Montreal, and, for a few years, in New York City. His playing demonstrates "highly imaginative and creative spontaneous music making." Craig Hurst - Jazz Review.com. Fraser is an in-demand sideman, and his contribution as a rhythm section player is valued for the "strong foundation" he gives the music while at the same time providing "much more than the requisite maintenance of the beat." Joanne Villeneuve - The Brandon Sun.

Music has taken Fraser to Europe, Asia, Africa, and South America. These travels have been important to him as a performer and educator. The sharing of his musical knowledge is of vital importance to him, and he has participated in clinics across Canada, and internationally in England, Peru, Haiti and the United States. Since 2006, Fraser has been on staff at the Schulich School of Music at McGill University in Montreal, where he teaches bass privately and instructs ensembles.

Fraser's own musical education began at a young age. A native of Ottawa, Canada where he was born in 1970, he started playing violin and piano when he was seven years old. In high school, he picked up the bass guitar and performed in rock and jazz-fusion groups. In 1989 he made the switch to acoustic bass, after hearing the classic Miles Davis record "Kind of Blue". He began his post-secondary musical studies at Ottawa University (1990), and went on to hone his craft in Montreal at Concordia University (1991-1994).

In the early summer of 1999, Fraser participated in the Banff International Jazz Workshop. This was a life changing experience for him, not only because of the opportunity to learn from and play with the incredible faculty, which included Kenny Werner, Dave Douglas, Joe Lovano and Dave Holland; it was also a fantastic place to meet musicians from all over the world, because of the program's international reputation. In particular, Fraser was marked by the energy and intensity of the musicians he encountered from the New York City area, and this fuelled a strong desire in him to spend some time there.

In November 1999, he moved to New York for 6 months to study with Gary Peacock and Marc Johnson thanks to a grant awarded him by the Canada Council. During this time, he would spend many of his days getting together with musicians all over the city, and the importance of original compositions during these sessions made a profound impact on him. He had written music since he was a teenager playing in rock bands, and he now felt a strong urge to delve more deeply into this universe. So, in the fall of 2000 he began developing his composition skills under the tutelage of Jim McNeely with the financial aid of the Conseil des Arts et des Lettres du Québec.

Still hungry to keep studying intensely, and wanting to spend more time in New York, Fraser began his Masters degree at the Manhattan School of Music in the fall of 2001, where he had the opportunity to study with Jay Anderson, Garry Dial, Dick Oatts, Mike Abene, Ludmila Ulehla and Dave Liebman. He profited from numerous playing opportunities at the school and in the jazz clubs around New York, and would occasionally tour in the US, Canada and Europe. He also wrote prolifically for a variety of ensembles, including small groups, big band, chamber ensembles and string quartet. He eventually plans to draw from these writing experiences to produce a program of original music featuring a large ensemble. His voice as a composer has been recognised by his peers, and Fraser had his composition "Halfway Home" recorded by Christine Jensen on her CD A Shorter Distance, and "Cornered Coach" on Josh Rager's Time and Again.

After graduating with his Masters Degree, Fraser stayed in New York until the fall of 2005, when he relocated back to Montreal. Since his return, he has written a book of original music for his quartet, and has started performing around town with this group. His band features Joel Miller on saxophones, Steve Amirault on piano, and Karl Jannuska or Martin Auguste on drums. He continues to perform and record regularly with some of Canada's finest jazz bands. These include Joel Miller's "Mandala", the Christine Jensen Jazz Orchestra, the Rémi Bolduc Jazz Ensemble, and the Jean-Christophe Béney Quartet. He enjoys a fulfilling teaching career at McGill University where he gives improvisation classes, private lessons and instructs ensembles. He released his first CD, entitled Aerial, in the fall of 2010, which features a collection of music that is largely influenced by his travels to South America, and his love of Nature. The band features Joel Miller on tenor and soprano saxophones, Steve Amirault on piano, and Karl Jannuska on drums.

In 2016, he recorded his 2nd album as a leader, entitled Treehouse. This CD reunites Fraser with long-time collaborator Joel Miller, again on tenor and soprano saxophones, with Jon Cowherd on piano, and Brian Blade on drums. The genesis of this group happened in June 2012, when the band performed at the Upstairs Jazz Bar & Grill in Montreal, as part of the club's jazz festival series.

In the spring of 2022 Fraser toured for a week with Treehouse in Quebec and Ontario, giving performances and clinics with the band.

Fraser now has a group in Montreal called The Phoenix. The members are Samuel Blais on alto and baritone saxophones, and clarinet, Carlos Jiménez on guitar, and Rich Irwin on drums, with Fraser on acoustic and electric basses. The band has been together since the fall of 2021, and they have performed at local clubs and some nearby jazz festivals. Please see the calendar page for upcoming concerts.
biography press discography 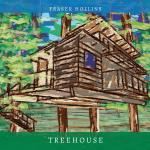 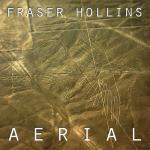 Bassist Fraser Hollins, whose big sound adds depth and breadth to a variety of local jazz ensembles, has finally come out with a CD of his own compositions, and it is a delight. The 11 pieces are mainly mid-tempo ballads with evocative and occasionally lofty themes, developed in a quartet of long-standing friends and musical cohorts, saxophonist Joel Miller and pianist Steve Amirault, with former Montreal resident Karl Jannuska on drums. It kicks off with the plaintive Crux, drawn with arco lines, and moves to the thought-provoking ballads Lost in the Maze and Currents, featuring Miller's muscular tenor and fluid ideas and the rich lyricism of pianist Amirault. Ending with the harder-edged Song for the Underdog and the positive notes of All's Well, the CD is a tribute to Hollins's talent as a composer and emerging leader.

Podworthy: Song for the Underdog
For years, Ottawa-raised, Montreal-based bassist Fraser Hollins has been girded the music of two of Canada's best jazz composers -- Christine Jensen and Joel Miller. Aerial suggests to me that not a little of their depth, sophistication and contemporary lyricism have rubbed off on Hollins.

Hollins' disc, which features Miller on tenor and soprano saxophones, pianist Steve Amirault and drummer Karl Jannuska, is continually captivating. The compositions are not... easily categorized or parsed...- I find them... intriguing, extended and complex, and I mean that in a good way. They are certainly not overly complicated, and in any event, focused playing and a strong sense of purpose make them must-hears.

Rich and rewarding are Currents, a theme that for me evokes a feeling of wide-open space, and Way of the Condor, which blends a slow Latin theme and a gospel-tinged extended coda. Song for the Underdog begins strong with Hollins and Jannuska having a loud conversation, and it stays strong as a brisk, hardy swinger. All's Well ends the disc simply but powerfully, stressing soulfulness and groove above all.

Throughout, Miller speaks expressively through his horns with a warm, woody, pliant sound and a committed, cliche-free approach to melody. Similarly, Amirault consistently puts conveying emotion and beauty ahead of displaying chops and hipness.

With every note, Hollins is a commanding voice on his instrument -- or more precisely, instruments. On several tracks, Hollins overdubs a bit of electric bass to add another colour to the music, emulating John Patitucci, with whom he has studied. Also like Patitucci, Hollins has a lovely sound when he plays arco. Hollins' bowed bass is the star of the short disc's first track, Crux, and it again dazzles on the companion piece Alpha Crusis and most of all on the lovely ballad Vyana.

Hollins debut as a leader is so satisfying that it makes me think that he has waited an awfully long time to present his most personal vision of jazz. It's a mature and compelling one, and it deserves the attention in particular of music lovers keen to know just where their Canadian jazz is at. Aerial will likely make such listeners clamour for me, and let's hope that a sequel to the disc is not long in coming.
Man--what a beautiful CD---wish i were the sax player--the tunes,. the mix, the sequence of tunes, the package--

one of the best I've heard in a long time 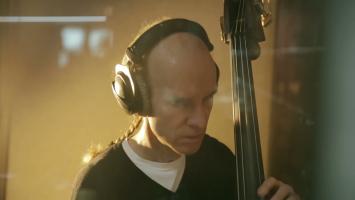 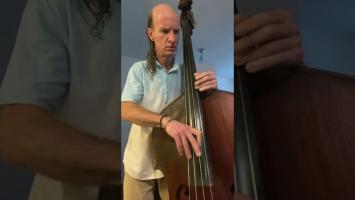 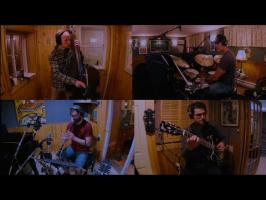 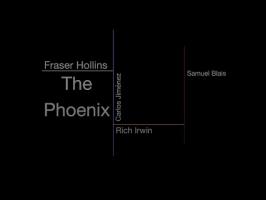 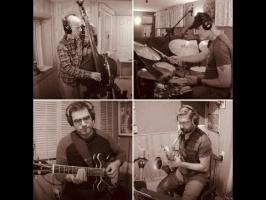 Fraser Hollins and The Phoenix/ Resistance is Futile - YouTube 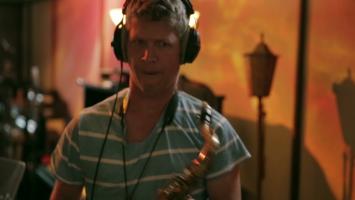 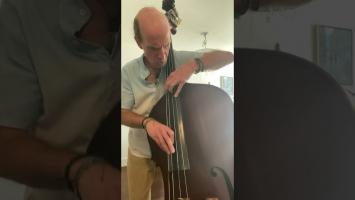 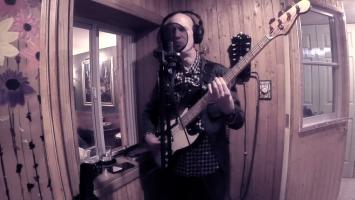 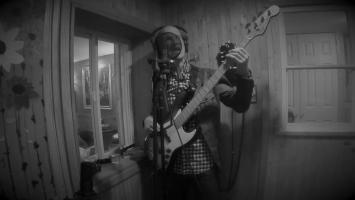 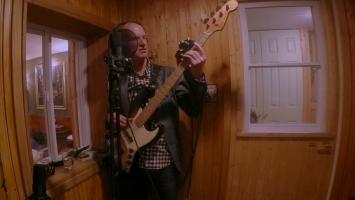 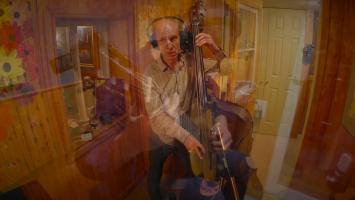 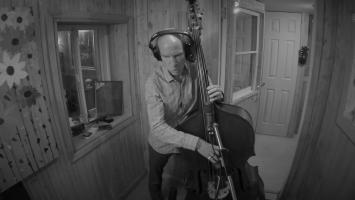 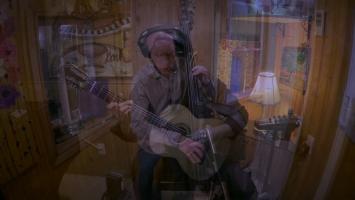